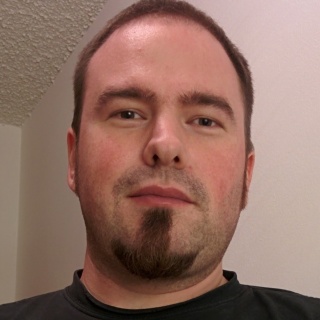 Donald L. King is a gay man and an aspiring writer of science fiction. He lives in Oakland, California with his two cats, and works as an engineer in the software industry by day.

As of this writing, he has not published any standalone fiction. However, he has written a fair amount of fanfiction over the years, the early examples of which are mercifully obscure or offline.

“A Panoply of Stars” [DRAFT] (2016).
Incomplete, hard science fiction with an LGBT interest, final length will be between 60,000 and 90,000 words. A radiotelescope detects an alien signal. As the science team decodes the message, concerns rise as they discover it’s a computer program containing multiple AIs. Should they run it? Includes multiple LGBT characters and a gay male romance subplot. ¶

“Ghosts” (2016).
Mass Effect fanfiction, about 33,000 words. In the wake of the Synthesis ending, the galaxy struggles to make sense of it all. Kaidan/M!Shepard. ¶

Existence (2012).
Book, David Brin. An orbital garbage collector discovers an alien artifact orbiting Earth, and the artifact bears a message that brings the continued existence of the human race into question. ¶
[

A Fire Upon The Deep (1993).
Book, Vernor Vinge. An expedition from the human colony Straumli Realm awakens a dormant superintelligence known as the Blight, and the race to end the Blight leads from the High Beyond to an unassuming world populated by the pack-minded “Tines”. ¶
[

The Uplift War (1987).
Book, David Brin. The scheming Gubru invade the planet Garth, an ecologically devastated world given to Humans to rehabilitate… but the Humans’ uplifted allies, the Neo-Chimpanzees, prove harder to control than the Gubru planned for. ¶
[